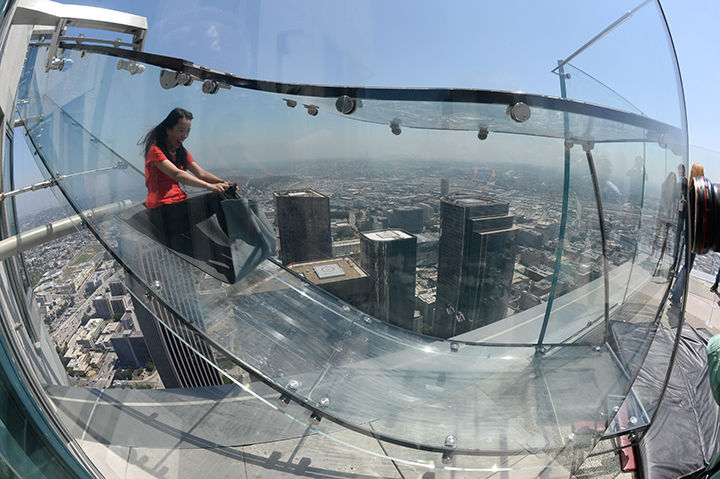 A definitive downtown Los Angeles skyscraper has hit the market for sale. The 72-story U.S. Bank Tower at 633 W. Fifth St. is on the market by a Singapore-based real estate investor and developer Overseas Union Enterprise Ltd. Brokers and analysts estimate that the building could be sold for as much as $700 million, or around $500 per square foot, which would put it with the top sales prices in the area.

The 1.4 million-square-foot property, originally named Library Tower when it was built in 1989, is rounded in shape with tiered stories toward the top and was the tallest building in the downtown skyline at 1,018 feet up until Korean Air built the Wilshire Grand skyscraper at 1,099 feet a few blocks away in 2017.

The building is currently estimated to be 85 percent occupied with a restaurant on one of the top floors. An unusual feature of any downtown skyscraper in the country has been added to the outside of the building at the 70th floor known as the Skyslide, which is a 36-foot long slide allowing visitors to slide between the 70th floor to the 69th floor for a small fee.

Office buildings in downtown Los Angeles sold for around $433 a square foot in the fourth quarter last year. Among those sales, Cerebus Capital Management bought the Wedbush Center at 1000 Wilshire Boulevard for $196 million, or about $410 a square foot in the largest deal of last year. Brookfield Asset Management paid roughly $430 million in 2013 to buy much of MPG Office’s downtown portfolio, which was the largest in the area at the time. The sale included other significant downtown high-rises such as KPMG Tower and 777 Figueroa.